IBM IS NOT a design company. Of its nearly 400,000 employees, few could rightly be described as aesthetes; of its assorted products, many seem to be of the “function over form” variety. And yet, if you look past its pocket-protector reputation, there’s little doubt that IBM is angling—more aggressively than any corporation of its size—to become a leading design company in the most literal sense of the phrase.

For going on four years now, IBM has been working to reinvent itself as a design-led business. In 2012, the computing behemoth employed just one designer for every 80 coders. Today, that ratio stands at 1:20. By the end of 2016, the company hopes to narrow it to 1:15. All-told, the company is investing more than $100-million in an effort to become a design-centered corporation. Charlie Hill, chief technology officer of IBM Design, says the plan is to completely overhaul IBM’s corporate ethos. For years, he says, “our teams had a very engineering-centric culture.” But in 2012, everything changed. “We wanted to shift that culture towards a focus on users’ outcomes,” Hill says.

IBM is best known by its super computer Watson, but a good chunk of the company’s business is making software for enterprise applications for analytics, security, and increasingly the cloud. You might rarely see the IBM logo, but it’s behind much of what powers your day-to-day interactions with technology. And just like you and I want a seamless, intuitive experience when we take money out of an ATM or pay at a grocery store, it stands to reason the people creating that software do too. “To do their work really expertly across industries, it has has to be just as intuitive as what they use in their personal lives,” Hill says.

That plan hinges not only on the company-wide implementation of design thinking—a framework for conducting business that puts users’ (i.e. customers’) needs first—but the establishment of IBM as a leader in the growing ecosystem of design-conscious companies. To that end, IBM today published its very own set of design thinking guidelines—a selection of best design practices the company hopes other big businesses will look to as they seek to remain relevant and profitable in a rapidly evolving corporate landscape.

Of course, IBM is far from the originator of the corporate trend in design thinking. The movement’s watershed moment, as a business methodology, came in the late 1980s, when David Kelley of Ideo popularized the idea of “user-centered design.” But Kelley’s strategies seemed best-suited to smaller, creativity-focused companies—not corporate titans. Hill explains that when companies the size of IBM adopt traditional design thinking theories wholesale, they quickly begin to break down. IBM’s guidelines take those canonical theories and adapt them for implementation across a sprawling, complex business such as itself. “When you look at a lot of the established representations of design thinking, we found that in practice they feel a little bit ‘waterfall-y,'” he says.

What Hill means by “waterfall-y is that even though design thinking champions nonlinear thought processes, big companies often find themselves mired in the methodology’s suggested phases (empathize, define, ideate, prototype, test). Ultimately this defeats the purpose, which is partly to build agility into the product-creation process. This trap is particularly prevalent at a company like IBM, where product teams are often very large and geographically spread out. “Generic design thinking doesn’t really tell you how to manage that situation,” Hill says. “And what happens is you very easily go off the rails because of the complexity of your environment.”

Design thinking is nothing if not a jumble of buzzwords artfully arranged into a business plan, and IBM has created its own glossary of terms for its scaled methodology. The company’s version of design thinking centers around something it calls “the loop.” Visualized, the loop is an infinity symbol punctuated with four dots—the yellow dot representing the user, the green dots representing the various actions of “observe,” “reflect,” and “make.” Explained simply, the loop represents the entire product-creation process, beginning with user-centered research all the way through prototyping (“everything is a prototype!” says Hill), to building and launching a product. The loop becomes a loop when you realize that the iterative process is never actually done; perhaps the loop’s most important requirement is reflecting on what’s been created and constantly improving it. This, of course, is most applicable in the world of software, which allows IBM to deploy updated versions as needed.

So far, more than 10,000 employees have gone through the IBM Bootcamp where they learn about the loop and other tenets of IBM’s design thinking framework. In total, the company has developed around 100 products using design thinking (the most well-known being Bluemix, its cloud platform for developing apps).

And the loop is just one part of IBM’s plan to recast its corporate culture as design friendly. Its entire design thinking manifesto is now online, and if you’re interested, it’s certainly worth a read. If nothing else, it provides fascinating insight into how a massively successful corporation plans to stay relevant amidst the rapidly changing worlds of computing and business. In many ways, IBM’s newfound focus on design is an admission that a good user experience isn’t always as simple as slapping on a new user interface—it can take a total overhaul of corporate culture to get it right. 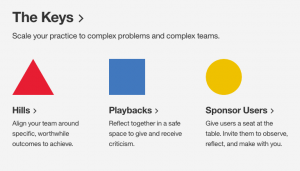 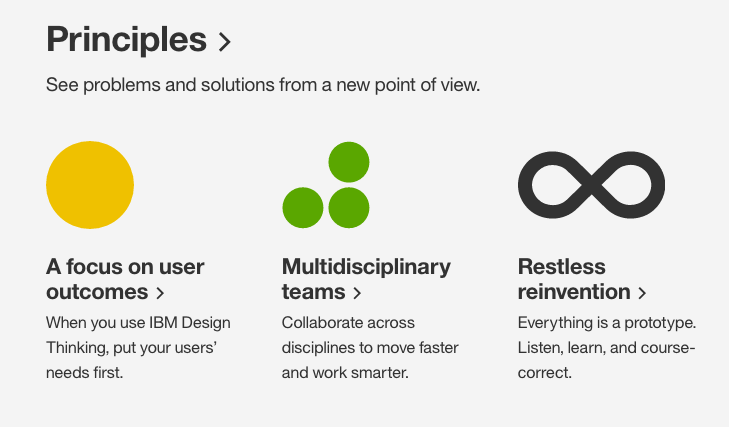